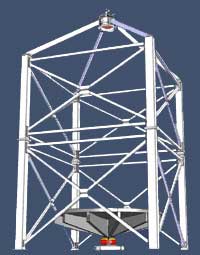 The International Liquid Mirror Telescope (ILMT) is a 4m class telescope project, in which several institutions from different countries (Belgium, Canada, India, Poland) are actively involved.
The ILMT uses Liquid Mirror technology: the primary mirror of the telescope is a rotating container with a highly-reflective liquid in it (mercury). The surface of the spinning liquid takes the shape of a paraboloid. 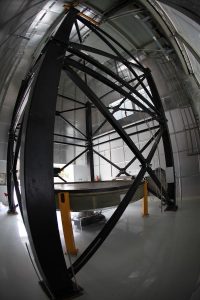 The ILMT is a promising instrument which will be entirely dedicated to a photometric/astrometric direct imaging survey. As liquid mirror telescopes cannot be tilted, they cannot track like conventional telescopes do. The tracking is done artificially by using a technique called time delayed integration (TDI, or Scan Dual Mode), which uses a 4K x 4K thinned out, back side illuminated CCD detector that tracks by electronically stepping its pixels. The ILMT is equipped, at its prime focus, with a time-delay-integration (TDI) corrector capable of imaging a field of 23′ x 23′ with a resolution better than one arcsecond. 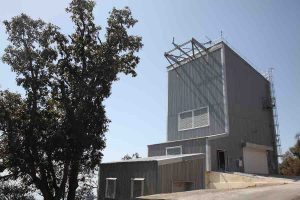 The ILMT is installed at Devasthal (Uttarakhand, India) where it will monitor a strip of sky of approximately half a degree in declination down to a limiting magnitude of about 21.5 in the i’ spectral band during a single integration. This survey will last for about five years. The information will be stored on disks so that the night observations can be coadded with a computer, leading to long equivalent integration times. The image subtraction technique will also be applied in order to detect transient objects (supernovae, gamma ray bursts, micro-lensing events, …). Its small F/D (~2) ratio makes it an ideal instrument to detect faint surface brightness objects. It should also contribute to a census of faint nearby objects such as white dwarfs, brown dwarfs, … based upon accurate measurements of their trigonometric parallaxes and/or proper motions.